Searching Your Family Tree Is Like Searching In A Forrest, In The Dark, At Night, Without A Torch, Wearing A Blindfold.

The conversation with my mum went something like this…..

ME: “Mum, would you help me make my family tree?

That was about it. Silence. A tumbleweed rolled past mums coffee table.

Mum continued watching a man eating a kangaroos bottom on “I’m a celebrity get me out of here”.

I didn’t push it. It was the answer I had expected.

I knew a bit about our family tree. Although to be honest it was more like a family forest.

I knew snippets of mums and dads past. For example I knew that mum had been born in Russia and at the age of 15 ran away from her home in Stalingrad and joined the Moscow State Circus which was on route to the UK and eventually arriving in Leamington Spa.

Mums stage name was “Bolshevik Brenda” and her act consisted of crawling around the circus floor with a woolly fleece on her back while the Circus Master declared that she was a “Half Women & Half Sheep”.

Crude as it sounds in today’s cable television, multi-channel digital world, mums act became very popular and she became quite a celebrity around town. She was often photographed with the celebrities of the day and had been destined for stardom if it wasn’t for her being caught in bed with the then Head of the Ministry of Defense surrounded by national secrets.

My dad was also a circus performer but he had poor hand eye co-ordination and tended to drop things, which is particularly unfortunate while working as a trapeze artist. However it was his job as a lion tamer that he was really bad at. One Sunday afternoon, in the middle of a matinee performance, one of the lions actually bit off one of his legs.

Dad continued the show like the true pro he was and apparently, he even got the offending lion, complete with his severed leg in its mouth, to sit up and dance to the tune of The Red Flag.

Many years later dad admitted that he had been a Russian spy and his van (below) was in fact a genuine mobile Russian Intercontinental Ballistic Missile launcher, and not a camper van at all which is why we never had a real holiday in it.

The van is now in the KGB museum in Bedworth. 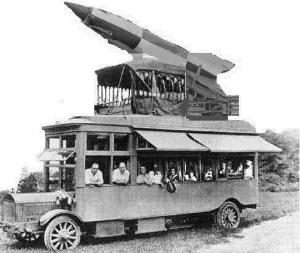 I will continue to research my family tree but I wont hold my breath getting any help from my mother.